The final period of Action Man's first outing saw the introduction of realistic 'Eagle-Eyes' in 1976 which were housed in a slightly larger head and operated by a small lever on the back of Action Man's neck. This head had more of a 'tan' and shine than the outgoing painted eyes figures and gave Action Man a permanent look of astonishment. This new look was developed in 1978 when a totally new 'Muscular Physique' was introduced.

Easily recognisable by the moulded blue trunks and sun-tan, the Action Man figure could hold slightly more complex poses and was built in such a way that it could not be disassembled and ultimately have parts replaced like the earlier elastic-strung figure. Early figures of the 'Artists dummy' body also had this head from 1976-1978 but are less common.

These final phase figures can suffer from 'head-flop' as the internal nylon band becomes exhuasted over time making repair much more a headache than the earlier elastic-strung figures. 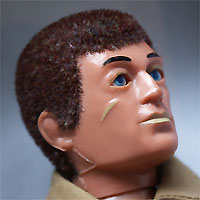 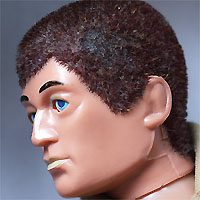 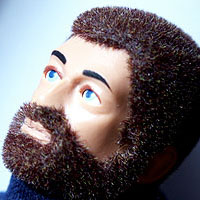 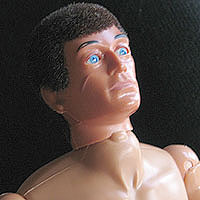 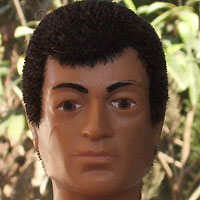 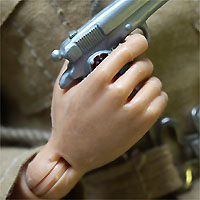 >BACK TO PAINTED HEAD