ABOUT THE ACTION MAN HQ

Building a vintage Action Man information resource for all to enjoy

Action Man HQ was originally created by me, Rob Wisdom in 2002 to fill a void on the web at the time for vintage Action Man content.

At the time the hobby was steadily growing but a definitive website was missing. I was already designing websites, and saw the potential for the sharing of information. I approached one notable and knowledgeable individual early on in my newly rediscovered hobby to possibly co-create a website, for the masses, but it became apparent that the time and effort to build such a website would have to be down to me in my spare time despite my limited knowledge at the time. Since those early days I have had the pleasure to meet with many knowledgeable people, attended (and supported) numerous shows, events, and resided on multiple forums - all in part contributing to the information in my head, and now on this website - I thank them all. Special thanks go to Bob Brechin, for always lending a hand as it were, and the members of the UAMHQ, VAME and AMMO forums - your knowledge collectively is unrivaled.

From 2002 the UAMHQ website slowly grew in line with my own collection. Members insisted that Action Man HQ should also have a Forum and I created the Unofficial Action Man HQ Forum in 2003.

On 21st November 2014 the Facebook Page was launched @UAMHQ. It currently has 1,533 likes. I am also part of the admin set up on Action Man Utd, which looks to progress to an official Action Man Club.

Since then the website hadn't undergone vast changes until 2016, when a concerted, and somewhat time-consuming effort was made to re-shoot and include much better images from the forum, and include a much deeper level of information to assist the collector. More video based content is planned for the future.

The consistent highest ranking of the ActionManHQ on Google and other search engines has always offered me opportunities to help grow the hobby and increase my personal collection.

As early as 2002 the BBC had reserched their way to the ActionManHQ and I found myself an adviser and in charge of Action Man props - assisting Roland Rivron to recount his memories in a makeshift studio in Leicester Square's Red Cube to help with a programme called 'I Love Toys'.

In the Summer of 2016 I was interviewed on "The Best Christmas Ads Ever" resulting in a few minutes of prime air-time at Christmas (and possibly re-runs for years to come!).

In June 2016 I crowd-funded a mission to launch Action Man into near space to celebrate his 50th birthday year. I named it Mission Mercury 10 and Chris Hillcox prepared a flight for a 1966 Action Man named Major Bob Tom - successfully getting him 11.5 miles into near space over Leicestershire and Northamptonshire. He came back to earth, and sadly remains lost. Art & Science Mission Mercury 10 captured the imagination and his exploits got Action Man firmly back in the national press and on TV. A film was made of this project which I directed and created. See it here.

Later in December 2016 I assisted the BBC One Show with some props for Jamie Oliver to interact with and helped dress the One Show's Set. I also featured in a BBC Wales very popular short film they comissioned about Action Man's journey from most popular toy to obscurity (and back).

Early in 2016 I contacted and met with Art& Science (A&S) at the London Toy Fair. I had discovered that A&S were on the brink of relaunching the Action Man brand to the UK. Subsequently I have assisted with building the new Official Action Man Website, providing the main photography for all the new product and boxes, and assisting with ideas and drawings for some of the new product ideas and concepts. A&S have kindly requested that the UAMHQ website become an official home for the history of the original 1966-1984 period. I will sit within the newly formed Action Man Collectors Club along with Peter Rooke, Bob Brechin (President) and Alan Dawson.

A&S have to be applauded for managing to gain the licence from Hasbro in the US and starting the magic once more in the UK. Let's hope there is continual appreciation of the dearly loved action figure from our youth.

I have recently been on BBC Radio a few times helping with a number of live shows.

In June 2017 I visited the WW1 Battlefields around Ypres and the Somme to pay my respects to the fallen and to capture some pognient imagery of a bespoke Action Man 'Tommy' doing likewise. My images were made into a small book which can be seen here: Action Man in the Ypres Salient

So, with the re-launch of Action Man in November 2016 being all but sold out, the new AMCon convention in Coalville every year, a famous TV advert featuring dancing vintage Action Men, more inspiring missions to attempt, I'd say the future seems as bright as its been in a long time for our eternal hero. We currently look forward to the launch of new products hitting the shops in 2018.

England were football World Champions when the first Action Man was released in 1966, and I was only 12 months old. I am pretty sure my first Action Man would have been the 1968 Commander (the talking one!) - I would have got him at Christmas. I was instantly captivated not realising that, on and off, he would remain a source of pleasure and creativity for the best part of my life.

I recall playing a lot with a British Infantryman too - a flock hair figure of the 1970s, and a Parachute Regiment figure - those puttees that unravelled despite my best efforts! I have a few special memories playing with home made tents in the garden - and leaving Action Man in them overnight. Also playing with them down the 'brook' between Danes Road and Jackson's Lane in Billericay, Essex. With friends I would make dams out of twigs and float Action Man in the still waters and bomb him with stones. I remember towing the rugged Action Man Armoured Car behind my Raleigh Tomahawk with mum's wool, and peddling so fast 'round the block' that he'd drift out and flip over on the bends. Throwing the Red Devil from the upstairs window for a flights of a couple of seconds that would have lasted minutes in slow motion in the imagination. And who could forget making paper bacon and plasticine sausages for Action Man's mess tin and Primus stove?

I recall visiting the two old ladies who ran Billericay's best toy shop - Essex Playthings - ready to search out the Tottenham Hotspur kit, only to find then, as now, it was a rare beast. I went home with an Everton Kit of all things! I can only imagine the blue and white kit was some kind of recompense for not getting my favourite team's kit, and was very close to Billericay Town FC's home kit. I think my last outfit I can remember having was the German Staff Officer of 1974. So six or seven years of intense fun. He was always a tough playmate, and a dependable friend, in that he was always ready to do whatever I wanted no matter how daft. All my memories of him are are happy, creative, and fun - he in part surely honing those key parts of my design talent that came out in later life - that's the unbreakable bond many of my age group have, and its not likely to go anytime soon for any of us. He still brings out the creative side, all be it in one sixth scale. And not just would-be designers were nurtured by his companionship as I have discovered.

Indeed, everyone that sees any of my Action Men immediately recount their own amazing tales. For example, the SAS soldier whose unit took an Action Man on their tour of duites as a lucky mascot. The soldier that was on the border just before the Gulf War kicked off, driving the grown up version of the Spartan Personnel Carrier that he coveted as a boy (despite his childhood friends' cruel observation that it had no real turret). My builder said he and his brothers were challenged by their big air-rifle-toting brother to camo-up their Action Men as best they could and hide them in their local woods. If he saw them he shot them. If not they got a point! Another boy used to put blackberries under his tunic and shoot him with his air rifle creating fake blood. Many were to end up riddled with pellets, burns or sometimes a scalping. Stefan - had the diver as a boy. In the bath he made a childhood pact that he would someday become a diver - and he did. Stuart my next door neighbour was a couple of years older than me and we would have running battles with our troops on those long sunny summer days of the 1970s. His father would visit him from time to time and always bring him Action Men uniforms for his 1968 Action Sailor figure. I remember he had (at least) the Argyll & Sutherland Highlander, Life Guard, British Infantryman, Parachute Regiment, Deep Sea Diver. His bounty quickly dwarfed my own. Another boy, Andrew Gill who lived down Parkside, the road opposite, got to the age when toys were becoming less important and adulthood rudely interrupts. His parents Fred and Doreen gifted my best mate Jonny Hart a huge cardboard box of Action Men, including the coveted German Stormtrooper to play with. I don't think Jonny was as intoxicated as I with Action Man, so I always felt a bit miffed that I was not 'next of kin' for the Action Men! At least they gained a new 'commander' before the inevitable. They too were to go into Mum's one-way farewell transporation box.

My Action Man days were truly over until my twenties. Gordon Hopkins, a dear father-in-law and Matchbox Models of Yesteryear collector, invited me to join him at the next toy fair in Basildon, Essex. I went not knowing what to expect. I was on the lookout for any Matchbox toys he might like. My eyes were drawn to an Action Man Tank Commander sitting in a box for the princely sum of £7 (this figure later went on to appear on a TV show!) I felt an instant affinity to him, and bought him as a momento. Months went by until the next toy fair, and I naturally went, saw another, and it too found its way home with me. And so it began...

My only true regret is that I do not have my original figures from childhood.

What about your Action Men?

My advice if you have any in your loft, is go fetch them down. If you have any sentimental attachment they will instantly bring back happy flashbacks and memories and you'll want to keep them. Dust them off and join a forum, and go about restoring them to their previous best, get the accessories you never got, or maybe hand them down to the next generation.

If you're not the sentimental type, then contact me, and I'll add them to my collection, and this website for all to enjoy!

Roland Rivron and Rob Wisdom in 2002

Rob Wisdom (and Marine!) at the original Palitoy Building in 2016 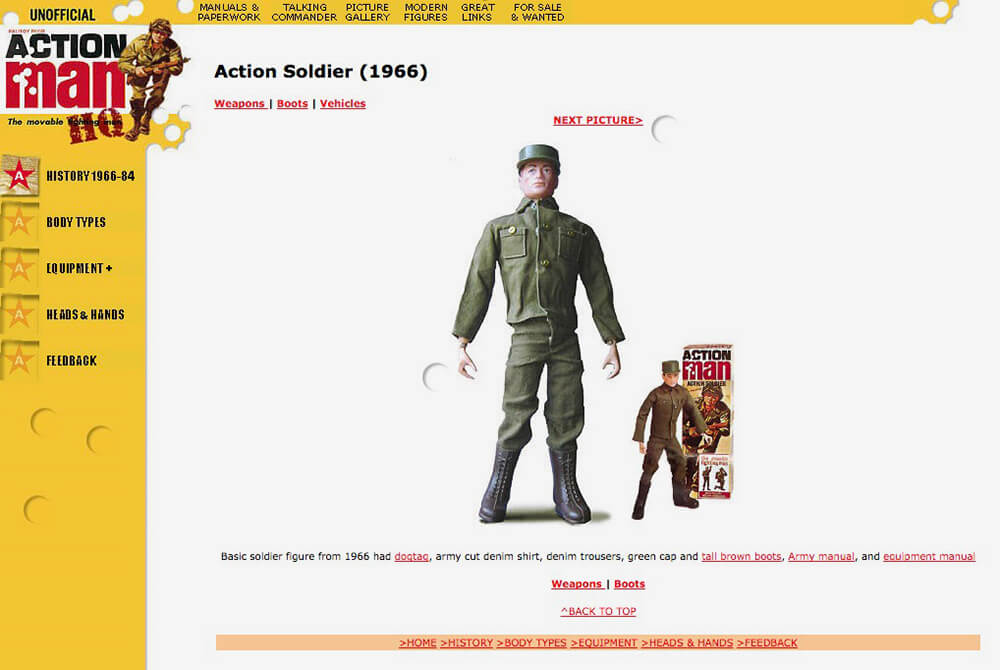 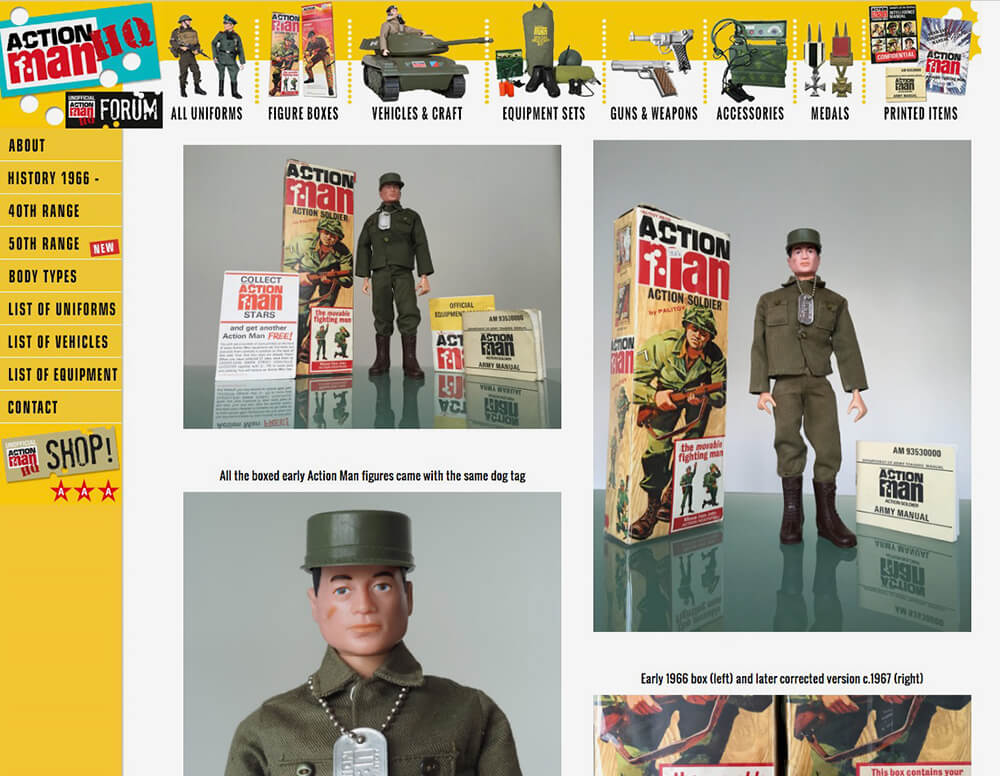 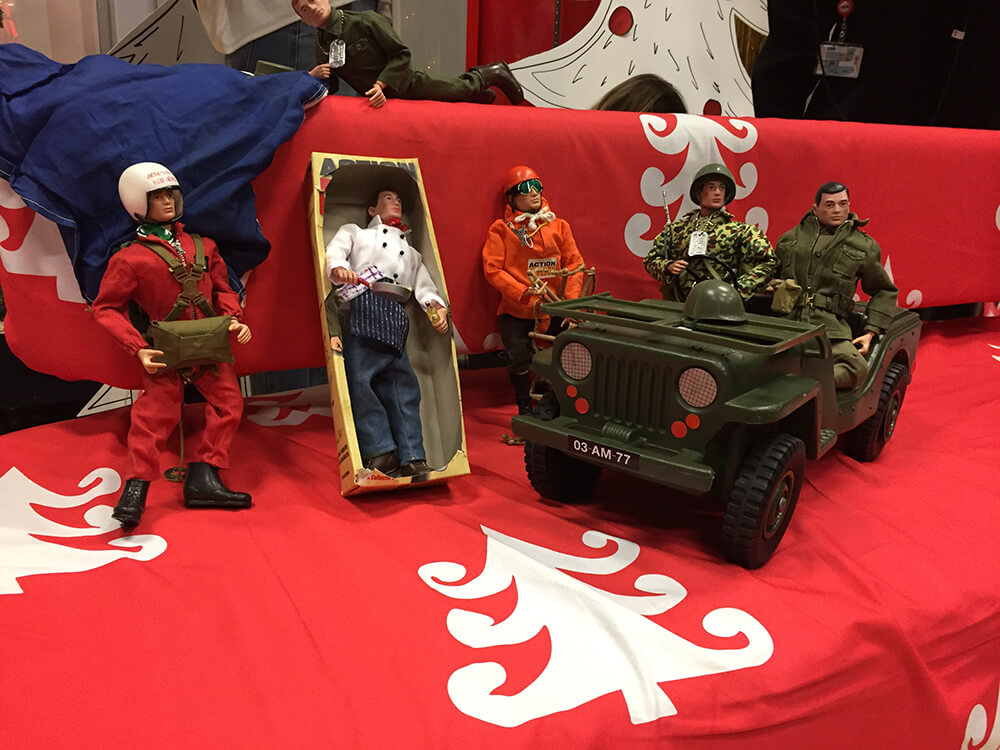 One of Rob Wisdoms custom made WW1 Action Man outfits in a photographic composition. Rob travelled to Ypres in 2017 and took some iconic imagery featuring an Action Man paying his respects to the fallen. 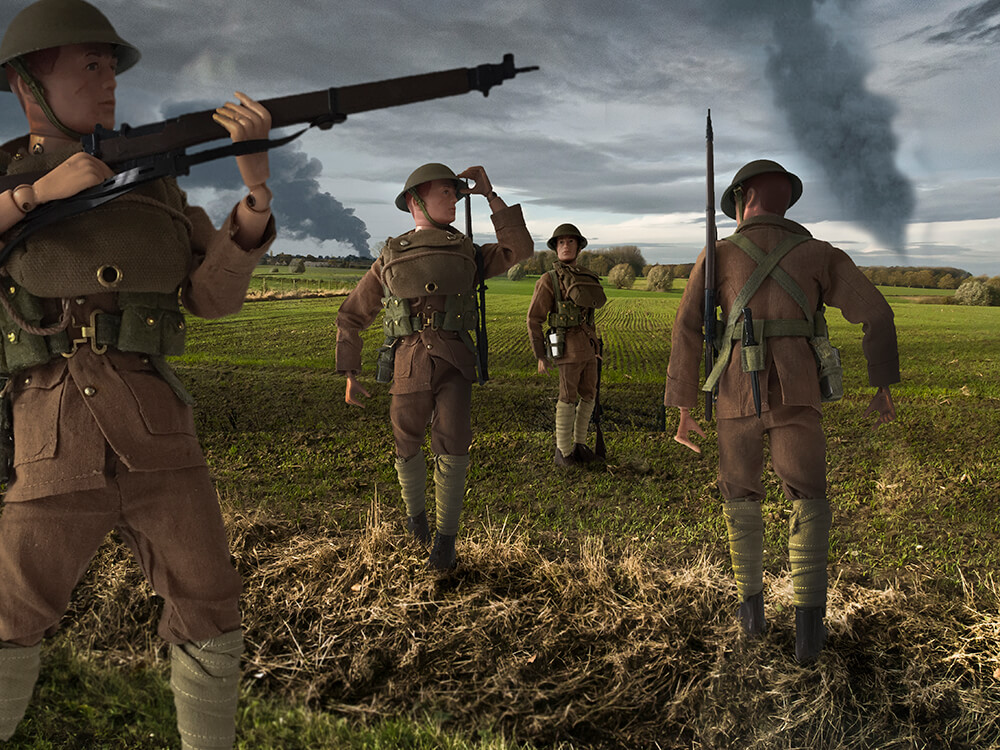